A boulangerie guide to villages on the Meuse

If I was to write a travel guide it would have to include a recommendation for the best boulangeries in the villages or towns on the Meuse. So as we meandered downstream the focus of each village, was ‘where is the boulangerie?’, and ‘is it open’. We are in the middle of the summer holidays, so the ‘is it open ‘ question was pertinent. For example in Revin, (which had a beautiful port), a notice on the door of the boulangerie indicated it was closed for August, as she needed a holiday and in Haybes I was lucky to catch the boulangerie open, before it closed at 11am. Again holiday hours. All in all had had success in each town except for our first day in Dinant where they had sold out of baguettes 🙁.

In all, our return journey to Namur took 9 days. We had a few days of rain, when we decided to stay put instead of braving the elements, then a few days in Dinant to see the bath tub races. This is a picturesque part of the world, that I hope we can return to one day.

The Maison d’espangol in Revin

The mineral museum at Bogney

The Hotel de ville in Haybes

When we arrived in Dinant, were advised by our French travelling companions, who we had shared the locks with on both our outward and return journey, that there was a bathtub race and associated festivities the next day. Luckily when we arrived we were able to secure the last mooring in town, but were soon assailed by another boat wishing to raft up. No problem, as long as they had sufficient fenders.

The festivities involved an all day market along the quay and of course the race. The weather was rather inclement, with showers and intermittent wind gusts, but although it played havoc with the stall holders, it did not deter the brave aquanauts, who if they didn’t get wet enough in their bath tubs, made up for it by jumping in the river. Our neighbours were sure we had never seen anything like it until I told them about the birdman festival we have for Moomba.

From Dinant to Namur we were back in the land of commercial barges, jagged cliffs and riverside chateaus. We specifically planned the stop at Namur to refill the cheese in our fridge, that was unfortunately lacking since Charleville.

Don’t book into the Grand Hotel at Waulsort!

Is that a barge or a very large garden statue

As we were walking down the lock I noticed a New Zealand flag on a lovely Linssen, and yes before we knew it we were sharing banter and drinks with our new friends who harked from Auckland.

Next day it was onto new environs , as we turned right and continued down river. We had planned to break the journey at Huy, but on arriving found the port was opposite a nuclear power station. Not the best outlook. In fact the lower Meuse is rather more industrial, and lacks the beautiful vistas of the upper Meuse. 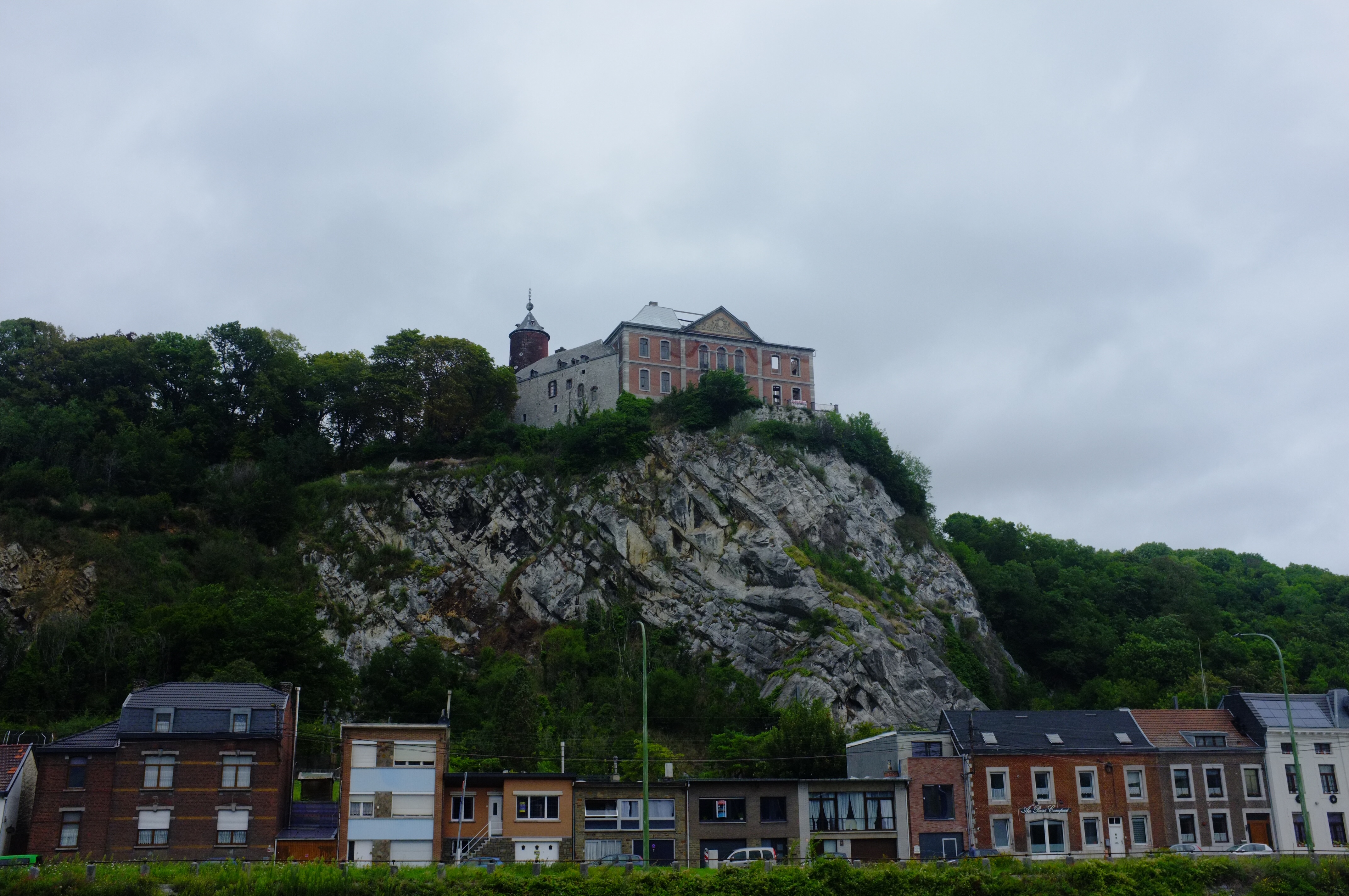 The journey from Namur to Liège was over 60kms, with 4 commercial locks. In all it took us about 7 hours, and as it was raining on and off it was better to be motoring down the river, than sitting looking at uninspiring landscape. As we arrived at the yacht haven in Liège at around 5pm, we were rafted up to a lovely old barge, built in 1916. Lucky us, last mooring available!

We were informed by our neighbours, that the largest market in Northern Europe was held the next day (Sunday), just along the dock. But as it turned out the market did not see much of us as it pored with rain all day, and it was only as the market was packing up , that we were able to venture out.

Liège, however did manage to collect some of our tourist dollar. There was a large Decathelon store in the city, where at last we purchased our much needed bikes. It might have taken Peter over 30 years before he bought a barge, but with a lot of nagging from me and advice from other boaters, it only took 4 months to convince him that bikes were as necessary part of our boating equipment.

Peter testing out the bike

Other than the successful purchase of our bikes, Liège was a bit of a disappointment. It seems to have lost its way, empty shops, rubbish on the streets and more homeless beggars than I have seen in any other city. The contrast is just 20kms down the river is Maastricht, which just after a brief walk into the centre today, is vibrant , with a busy shopping district, loads of cafes and of course people, a lot of whom are riding bikes!

3 responses to “A boulangerie guide to villages on the Meuse”